It may seem a trifle quixotic having just posted about some of the fabulous eating locations on offer in the Cotswolds – the sort of places that lay on a genuine visual feast as well as culinary delights – to suddenly switch modes and go for a place where the surroundings could not be more mundane if you tried. To top it off, it was raining, and raining hard when we went, turning down the potential visual interest, still further. So there we were, on Love Lane – could there be a more incongruously named industrial estate in the world – surrounded by builders’ merchants, plumbing stores and the like, about to have breakfast. And not from some roadside trailer either, but a farm shop: another oddity. (Call me a traditionalist, but I expect to find farm shops in the countryside, not right across the road from Travis Perkins.) The full car park, however, does give one a small clue as to what locals think of the place.

Once you go inside however – and our entrance was rapid to avoid a soaking – all such notions of incongruity disappear, things all make sense, and you are transported rapidly back to all things food. At first glance, on entering, the Jesse Smith Farm shop just looks like a butcher’s shop – no surprise there, they have been selling meat in the Cotswolds for over 200 years – but look around and it is the genuine article. The thought of eating a meaty breakfast while confronted with the raw materials hanging full length behind panes of glass not far away may not sound terribly appealing, but once at table, this doesn’t figure. The range, by the way, goes beyond meat into dairy, bakery, fruit and veg and more besides, so if you need to do a spot of food shopping, there is plenty to tempt.

The restaurant is round the corner from the shop, and as we were exceeding hungry, we turned left, hardly giving the shop a glance and made a quick grab for a table – there are days when you need the reflexes of a German tourist on the Neapolitan Riviera to get a spot, so popular it can be.  Having made your choices, you order at the counter, giving your table number and trying to resist the siren call of the delicious cakes and pastries displayed alongside. There is something quite nice about ordering and paying all at once – it may just be me, but parting with money before you’ve eaten is preferable, as it means there is nothing to settle after your meal, except the meal itself. You choose, you pay, you eat and you’re done: perfect.

The menu, an A4 sheet decked out on both sides with colourful graphics depicting rather than listing the choices available, reads like part atlas (‘The Vegas’, ‘The Texas’), part bad joke (‘The Mexican’, ‘The Brit’, ‘The French’) and part humidor price list (‘The Monte Cristo’, ‘The Royale’.) And there is more than just the promise of exotic climes to tempt one: the sound of “coriander hash, spicy sausage, avocado, pineapple salsa, chorizo, poached egg” gets more tempting with each reading of it. And if you’re up for it at 10:30 in the morning (and I most certainly was) you can feel reassured that it looks as good as it sounds, and tastes even better. The smoky heat of the spicy sausage patty and the chorizo is tempered a little by the smoothness of the poached egg and avocado, while the sweet freshness of the pineapple sits on on top like a gilded flavour tiara. 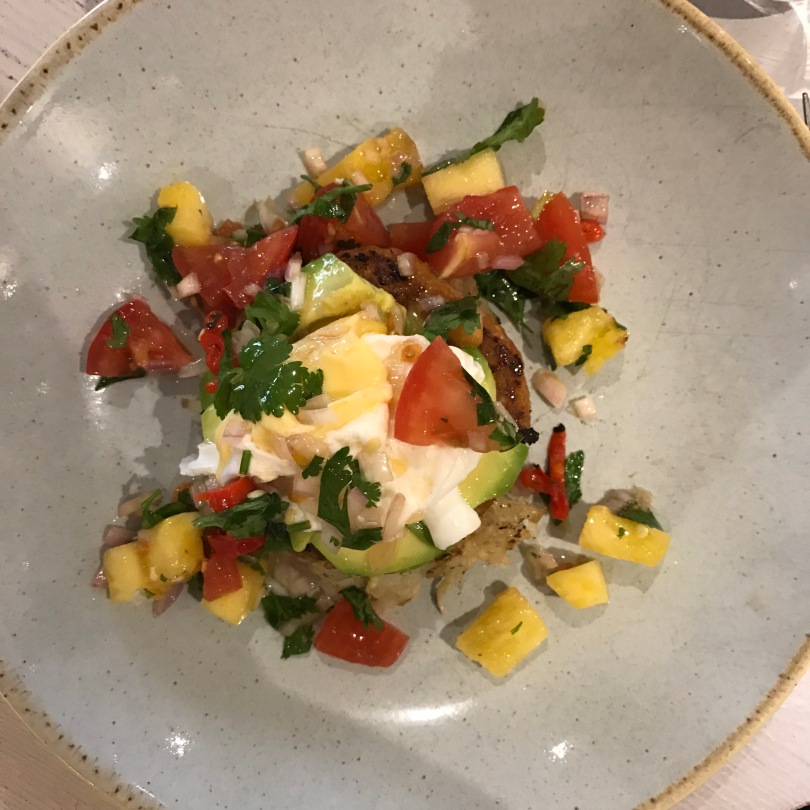 My dining partner had the Spaniard (as it were). This is essentially a breakfast burger, although I confess I think I’d be happy eating it irrespective of time of day. The beef patty is served with crispy chorizo, avocado and topped with a fried egg and all in a brioche bun. The crispy chorizo is particularly good, like crunchy, spicy pennies, they offer a textural as well as a flavour lift to the dish, and if you have not tried a fried egg in a burger, then this might be a very good place to start. I came across the notion of fried eggs in a burger “stack’ many years ago on a trip to Portland in Oregon and have been a big fan ever since. The US may have many gastronomic faults, but they certainly – particularly in Portland – know how to do breakfast too. Try it: I don’t think you’ll regret it. 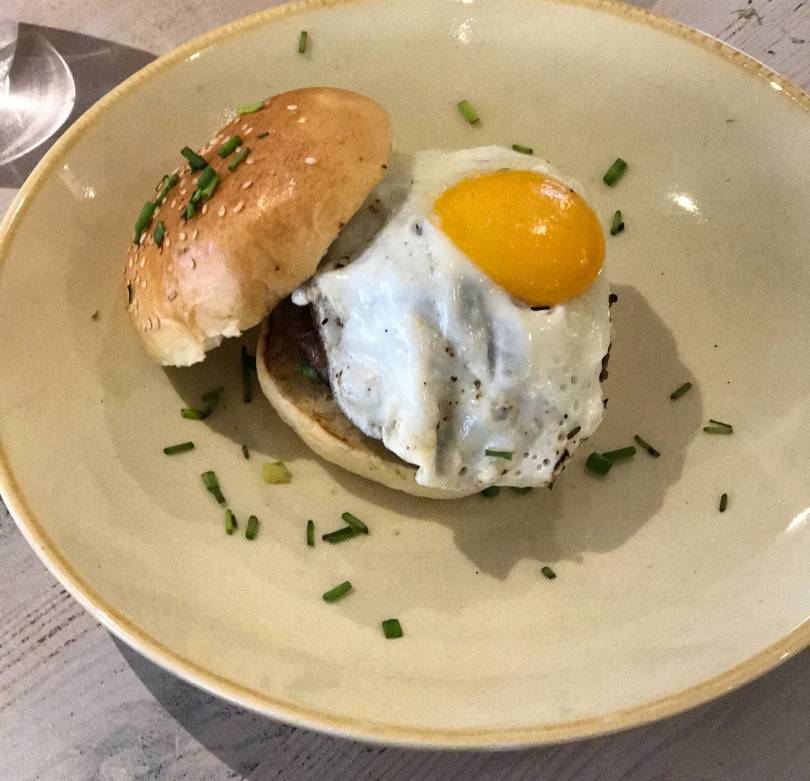 While I did not have the ‘Vegas’, I couple made their way out to others as I was ordering at the till and they did look every bit as colourful, decorous  and tasty as their hispanic cousins on the menu. The pancakes – not too thin, but not too thick – were perfectly dressed with yoghurt, fruit and granola. It looked so good, that were a smaller portion available, it would be a fine follow-up to the savoury splendour of the dishes above. Or you could fill any gaps with one of the glistening cakes or buns that are at the counter, ready to oblige should your will power fail you (and whose wouldn’t, frankly?) The full ‘English’ looks equally splendid, and having enjoyed food from Jesse Smith’s butchers shop, I feel I might be on pretty safe ground vouching for that as well.

All in all, there is little not to like about Jesse Smith’s Farm Shop. From the eclectic furniture choices to the cosmopolitan menu, this is a place where you can do breakfast properly and with a difference. With the usual gamut of hot drinks available it does have all you need. There is a small exception to this, and that is the coffee, which I find to be quite harsh and lacking in just a touch of care. The reason I call this out with Jesse Smith’s Farm Shop in particular (after all, they’re hardly alone as an eatery serving average-at-best coffee) is that Rave Coffee is just up the road where the beans are not only available,  they’re actually roasted there. The cognitive dissonance of this is something that jars. We are lucky to have two excellent coffee outlets in Cirencester, but as yet none come with breakfast, and while I hardly suffered through the pot of light and fragrant green tea, I can’t deny that I found myself wanting a nice clean hit of filtered coffee or an espresso chaser to be part of what was an excellent excellent breakfast.

The location may seem odd, the views uninspiring to anyone but a 90s brutalist architecture buff, there is plenty to recommend the Jesse Smith Farm Shop, firstly as a shop, but also – and most definitely – as a prime breakfast destination. Alongside Rave and Dolcetti just a few steps up the road, Jesse Smith’s makes quite a nice little gastronomic enclave in an area where you’d least expect it. It is certainly well off the tourist – or even the casual Saturday shopper -track, but if you happen to be visiting the town on a weekday or weekend and are in need of coffee, ice cream or a delicious breakfast or brunch, head on up to Love Lane (yes let’s call it that, rather than just the industrial estate). 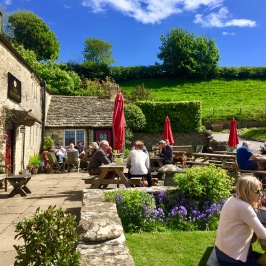 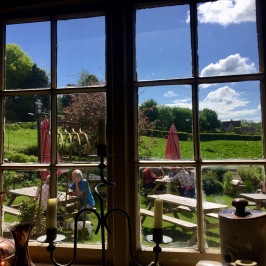 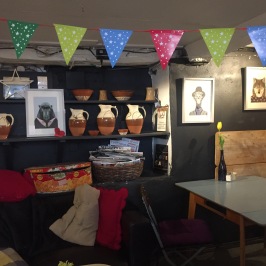 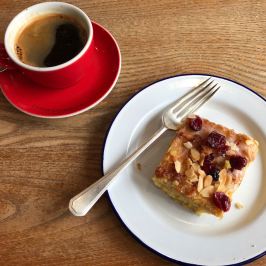